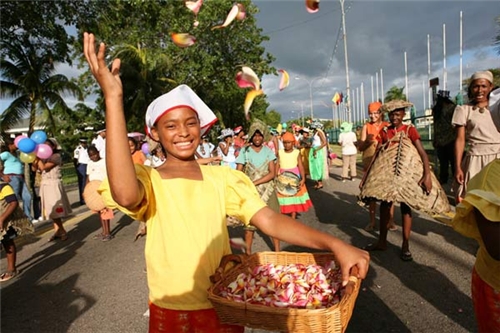 Creole, the mother tongue of 94 percent of the nation in 1990, was adopted as the first official language of the nation in 1981. English is the second language and French the third, all of them officially recognized. The increased emphasis on Creole is designed to facilitate the teaching of reading to primary-level students and to help establish a distinct culture and heritage. Opponents of the Renй government thought it a mistake to formalize Creole, which had no standardized spelling system. They regarded it as a great advantage for Seychellois to be bilingual in French and English; treating Creole as a language of learning would, they feared, be at the expense of French and English.

Creole in Seychelles developed from dialects of southwest France spoken by the original settlers. It consists basically of a French vocabulary with a few Malagasy, Bantu, English, and Hindi words, and has a mixture of Bantu and French syntax. Very little Seychelles Creole literature exists; development
of an orthography of the language was completed only in 1981. The government-backed Kreol Institute promotes the use of Creole by developing a dictionary, sponsoring literary competitions, giving instruction in translation, and preparing course material to teach Creole to foreigners.

Although discouraged by the Renй regime as a colonialist language, French continues to carry prestige. It is the language of the Roman Catholic Church and is used by older people in correspondence and in formal situations. Some 40 percent of television transmissions are in French--beamed by satellite to
an earth station provided by the French government--and most Seychellois can speak and understand the language.